More Canadians plan to work past 65

Retirement is changing in big ways and one of the biggest drivers of change are the baby boomers.  The baby boom started back in 1946 and for 20 years, there was a massive number of babies born.  The earliest boomer has turned 65 and for the next 20 years we are about to see massive number of people deal with retirement.

For the past 15 years, I have been teaching retirement workshops and one of the biggest changes to planning is that more and more of these boomers are planning to work in retirement.

Sun Life has just release their Fifth annual Unretirement Index survey.  New research by Sun Life and their Unretirement index suggests that the latest trend is that boomers are planning to work longer and retire later.  Heres some of their key findings.

Fewer Canadians plan to be retired at 66

“The dream of being able to afford a full retirement at age 66 is declining among Canadians, it’s being replaced by the reality that many people expect to be working beyond the traditional retirement age,” said Kevin Dougherty, President, Sun Life Financial Canada. “The aftermath of the financial crisis of 2008 has had a lasting impact with more Canadians expecting they will need to work longer as a result.”

Why are Canadians planning to work past 65?

The survey revealed that more Canadians are expecting to work past 66 because of necessity and fear of outliving their savings: 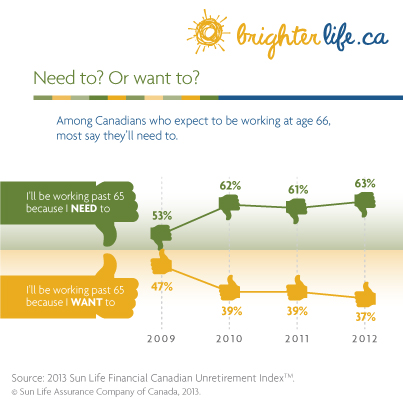 The survey also found that Canadians have a gap in their thinking about retirement savings. They anticipate requiring an average income of $46,000 per year for their retirement yet they are only aiming to have $385,687 in retirement savings (excluding their home and other property).

At the same time, only a quarter of Canadians (23 per cent) stated saving for retirement was their number one priority. Paying down debt or credit cards was the number one priority for nearly half of Canadians. The priority placed on saving for retirement varies with age. It was a top financial priority for 37 per cent of early Boomers in the 57 to 65 year age group. The number dropped to 12 per cent of people in Generation X – 30 to 46 year old age group – who say it’s their top financial priority.

What to do in a bear market?

What is a safe withdrawal rate?