Develop a strategy for charitable donations

Did you know that the percentage of Canadians donating to a charity has fallen over the past few decades? In a CBC article, the research said that only 23% of Canadian donated to a charity, down from 30% in the 90s. At this time of year, we get bombarded with opportunities to donate money to worthwhile causes. Many of us are inundated with pleas to help others at such a given time of year and while our hearts may be in the right place, we also must face the realities of budgeting for giving gifts to our friends and family. I was recently told by one charity that 90% of all charitable donations are done in the month of November and December.

Why donate to charities?

According to the Canadian Center for Philanthropy, the top motivators for giving are:

According to the most recent National Survey of Giving, Volunteering and Participating, 78% of Canadians make direct financial donations. The average donation is dropping and the last report shows that the average donation per year is about $200 per person.

Where does the money go?

How can you make a difference?

There are a number of ways to give to a charity.

This is an area with which many people are familiar. We can make direct cash donations to charitable organizations through causes like walk-a-thons, telethons, golf tournaments, etc. Pick a few charities that are important to you and make a regular effort to support these meaningful causes. Many charities have monthly or yearly giving plans available to facilitate your schedule. Planning your donation ahead of time might prove to be more gratifying. Personally, by taking a few minutes to select the charities that are meaningful to me, this allows me to deal with the multitude of telephone solicitors by saying, “I’ve supported my charities already, thanks.”

Most contributions qualify for a tax receipt. While only 11% of Canadians give to charities to get a tax credit, it is a good idea to try to get a tax receipt for your contribution. Your first $200 of charitable donations qualify for a 15% federal tax credit. After $200, you will get a credit of 29%. Individuals are limited to claim donations of 75% of income, except in the year of death (and the preceding year) where the limit is 100% of income.

Instead of giving money to charities, you can provide donations “in-kind”. One common example of this is donating cans of food to a food bank instead of cash. On a bigger scale, some people will choose to donate cars, stocks or even property to charities as significant “in-kind” donations. Tax laws allow for reduced capital gains taxes for gifts of appreciated assets to a charity. Simply put, if you want to donate property other than cash such as a capital property you may benefit donating the property in kind rather than cashing it out and donating cash. Check with an accountant about how the tax rules related to you specifically.

One of the common tools to provide for charities is the life annuity. You can use annuities in a number of different ways to provide charitable gifts while you are living or after you pass away. The annuity can provide you with a steady stream of income while you designate part of the capital (or income), today or upon death, to the designated charity. In this case, the goal is to provide for a charity without giving up the ability to produce income. The downside is that there is the relinquishment of control over the capital; however, future income is guaranteed for life by the annuity.

Setting up a private charitable foundation is something that typically only the rich can afford. Now there are charitable giving programs that allow you to start an endowment fund that gives you benefits similar to having your own private foundation but with as little as $10,000.

In Canada, there are over 150 Community foundations that provide a flexible, and easy way to set up an endowment fund. Locally, we have the Edmonton Community Foundation, which allows individuals to create a planned giving program in the foundation with their own name.

In 2007, I sold my previous business and decided to take a portion of the sale and start a charitable giving fund I call the “Yih Charitable Giving Fund” through the Edmonton Community Foundation. Every time I make a contribution to the Yih Charitable Giving Fund, I get a tax receipt for the lump sum contribution and every year the annual growth goes to a charity of our choice. The really cool thing about it is I have involved my kids as they get a chance to determine which charity gets the annual donation. I feel like this will be a legacy that will continue for many generations beyond my wife and I. It’s also a fun way to teach my kids about the importance of giving back.

Let’s say your wish is to leave a legacy of $100,000 for a chosen cause foundation, or educational institution, but you don’t want to give up that kind of money now, as it will impact your standard of living or ability to produce income through retirement.

You can put a life insurance policy in place that will pay $100,000 to the chosen charity by naming it the beneficiary of the proceeds. You can then claim the annual cost of the insurance policy as a charitable donation, even though the money is only gifted upon your death.

What if your goals are the same but you don’t need charitable credits today? Rather than claim the annual premiums of the life insurance, your estate could make better use of the credits, due to large pending tax liability (RRSP/RRIF, pending capital gains on an appreciated asset, etc.).

Your estate, then, claims a total of $100,000 in charitable donations for the year of death (and can carry back any unused portion to the preceding year by having the executor re-file) and reduces any tax liability caused by your death.

While every Charity needs financial resources, it also needs manpower and time. If you are in a situation where you can not contribute financially, then get out there and volunteer your time and energy to support these worthwhile causes.

Ideas for success, wealth and happiness 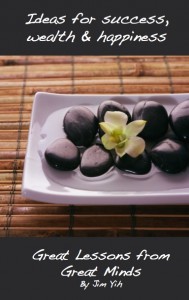 Many years ago, I wrote a book sharing all of my personal inspirations and philosophies with others. What started as a legacy piece for my kids to help them be more inspired to more success, wealth and happiness became another project of giving. When my wife read the book, she suggested that not only would my kids and family learn from the teachings but anyone could learn from these great ideas. At that point, we decided it would be a great idea and strategy to raise money on an ongoing basis for our charitable giving fund.

100% of the sale of the book go to our charitable giving fund. If you would like to contribute to a great cause but also get my book with great ideas for more success, wealth and happiness, you can buy it on Amazon in paperback or kindle formats.

Back to school spending is up

Are you a victim of downsizing?