Differences between LIRAs and RRSPs

In dealing with Workplace Savings Programs, there can be a lot of confusion with the difference acronyms in the financial industry.  One of the common misunderstandings is knowing the difference between LIRAs and RRSPs.

What is an RRSP?

RRSPs are very common.  As a result most people have heard of them, know something about RRSPs or have contributed money to an RRSP.  There is lots of information on RRSPs so here’s a quick summary:

The RRSP is a tax sheltered savings plan designed to help Canadians save for retirement.  Contributions to a RRSP are voluntary and subject to contribution limits.  When you contribute to a RRSP, you save money in taxes because you get a tax deduction.  There is no tax on the growth of the investments inside the RRSP.  Tax is paid when money is withdrawn from the RRSP.

What is a LIRA?

As long as you are employed by a company or organization with a pension, your money stays in that pension.  There are two kinds of pension plans – defined benefit plans and defined contribution plans.

Related article: Pension Plans are the foundation of Retirement Planning

A LIRA is a Locked-In Retirement Account and is designed for accumulation of pension money outside a pension plan.  If you do not need income from your pension funds, then a LIRA allows you to manage your pension funds personally.  A LIRA is just another type of registered account much like an RRSP.  Think of them both as ‘buckets’ of money.

Locked in Retirement accounts (LIRAs) are accounts that hold pension funds once you are no longer employed or part of the pension plan.  If you have a LIRA it’s because you were part of a pension plan with a previous employer.

When you leave and employer prior to retirement, you will be given an options package from the pension plan.  You may have the choice to move the money into a personal plan but any locked in portion of the pension must go into a LIRA.

But when you leave that company, Many people assume you can move pension money into a RRSP but that can only happen if it is a relatively small amount of money. 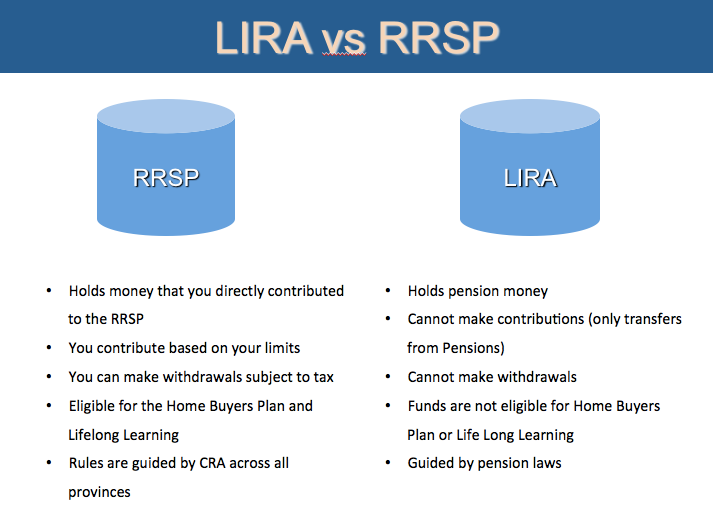 Differences between LIRAs and RRSPs

Here are some of the common differences between LIRAs and RRSPs

Similarities between LIRAs and RRSPs

LIRAs and RRSPs also have some similarities when it comes to tax and investment options:

What is a LIF?

The big difference between the LIF and a RRIF is that the LIF not only has a minimum income but also a maximum income that prevents you from spending the money too quickly.

Do you need critical illness insurance after retiring?