Recently I wrote about theoretical retirement income options from a Defined Benefit Pension and a Defined contribution Pension.

This week, I would like to look at this from a more practical perspective via a case study of Paula.

Paula has turned 60 this year and is getting ready for retirement. Although she has a pension through work, it’s a Defined Contribution pension and her biggest concern is knowing how much income she will get from her pension plan. Let’s take a look at her retirement income options.

The DC Pension plan is at Sun Life. It is invested in a few different mutual funds and sitting with about 65% equities and 35% fixed income investments. The pension has done quite well because of the strong market growth over the past 3 years. She has made over 12% compound annual returns over the past few years which has helped her to accumulate $450,000 in her pension. Paula is divorced with 2 adult children who are both financially independent. She has owns her own home and has no debts. She has another $110,000 in RRSPs and $38,000 in her TFSA.

When Paula retires, she will be faced with a number of differentretirementincome options. The first option to explore is the Life Annuity. With a Life Annuity it’s important to get quotes from a financial advisor or from different insurance companies.

Life Annuity rates will change on a daily basis so it’s important to always shop around for the best deal. After getting some quotes from a financial advisor licensed to sell Life Annuities, here’s a summary of three quotes:

Obviously, the best deal for Paula isGWL who will pay Paula about $26,418 per year in pension income. This is a lifetime income which means it pays until she dies. She will never outlive her income. The income is secure and predictable. However, if Paula passes away early, there is no return of capital to her after 5 years. 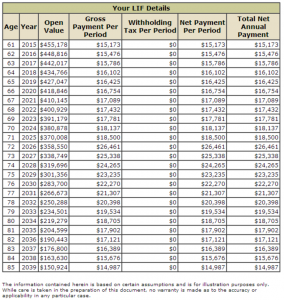 As you can see, the minimum income starts much lower than the Life annuity ($15,173 vs $26,418 per year) but increases as Paula gets older. I used a very conservative return assumption of 2% for illustration purposes only. Remember that the minimum income will change as rates of return change. This chart was produced with financial calculators from Mackenzie Financial. You can play with this data and use your own set of assumptions.

2. Maximum Income LIF. Unlike a RRIF where there is no maximum income restriction, the LIF has an annual maximum that also changes year by year.

From this illustration, you can see that the initial income is much higher than the Life Annuity ($33,592 vs $26,418) but the income decrease over time. Again, this is based on a very conservative 2% rate of return assumption. A higher return can dramatically change the income values over time.

The LIF offers much greater flexibility from theperspectivethat you can set your income amount (subject to minimums and maximums) and you can change your income anytime. With the LIF, you are responsible for making investment decisions which for some is an advantage but for others a disadvantage.

A Life Annuity will benefit those that live a long time because the income is guaranteed for life. Those that have shorter life expectancies will benefit with the LIF because there is always an estate value. What you don’t use in the LIF will be passed on to beneficiaries. If will be taxed first to the estate but beneficiaries are likely to get something.

3. Level income LIF. Most people prefer to have a level consistent income in retirement as opposed to one that increases or decreases over time. If we set the income at the same level as the Life Annuity ($26,418 per year), we can see the breakeven point based on a 2% return. 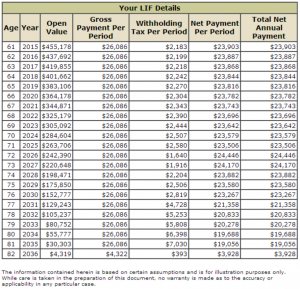 Related article: The difference between LIRAs and RRSPs

To complicate matters a little more, Alberta has pension unlocking rules. As you can see from the information above, pension rules can make it quiterestrictiveto access extra money from a pension plan. Given that many people were unable to use all their pension money in their lifetime, some provinces introduced unlocking rules. In Alberta, were Paula lives, she is able to unlock 50% of the pension funds and transfer it to a RRSP or RRIF which has no withdrawalrestrictionsor income maximums.

Related article: Unlocking pension money: Getting money out of LIRAs

Choosing the LIF gives Paulamuch more flexibility in choosing income. These projections are using a 2% return so any increase in returns can increase the income.

Paula could always transfer the LIF to an annuity in the future if interest rates increase. She could not move from an annuity to a LIF because once she purchases the annuity, she is locked in for life.

Choosing a life annuity is not great for estate planning purposes as her children may not get any money from the annuity. That’s where the LIF has a greater appeal because any money Sally does not use can be given to the children or grandchildren at death (subject to taxation).

After showing Paulaall the information, she decided the LIF was the best way to go. She decided to unlock 50% to a RRIF and move the other 50% to a LIF. With the LIF, she chose a maximum income ($1400 per month) and then set the RRIF at $1085 per month.

Did Paula do the right thing? What would you have done?

Building a Relationship with Money

Managing money when you don’t have a steady paycheque